Music industry veteran Jesse Barnett launched Right Arm Resource on July 6, 2005. Based in North Easton, Massachusetts, the company offers specialized radio and tour promotion services tailored to artists in the adult alternative genre. “Right Arm Resource is founded under the premise that in order for both sides to succeed I must make myself an indispensable partner to my client,” says Barnett who has worked in the music industry for nearly 30 years.

“I have always felt that the key to good client relations is to ingratiate oneself as part of the team and really hone in on the individual needs of each project.”

Prior to launching Right Arm Resource, Barnett earned his Independent Promotion stripes with stints at Vector Promotion, a division of Nashville, Tennessee-based Vector Management and Oakland, California-based Outsource Music. He began his career in the music industry in the Los Angeles promotion department of A&M Records. From there he spent two years as the Co-Director of Promotion at Hybrid Recordings in New York City. The Emerson College graduate worked as a copywriter at Foote, Cone & Belding Advertising in Los Angeles before entering the music business. 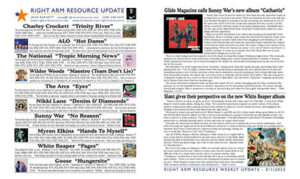 I was going to explore someplace new this morning

Didn’t expect so much snow with my waffles this

Couldn’t ask for a better view while eating waff

Blue hour before sunrise with the glory of the Tet

Just after sunrise, the fog began to fade and the

The reflections of the Grand Tetons in Jackson Lak

Seeing a bald eagle in flight is always awe-inspir

Check out our archives by month